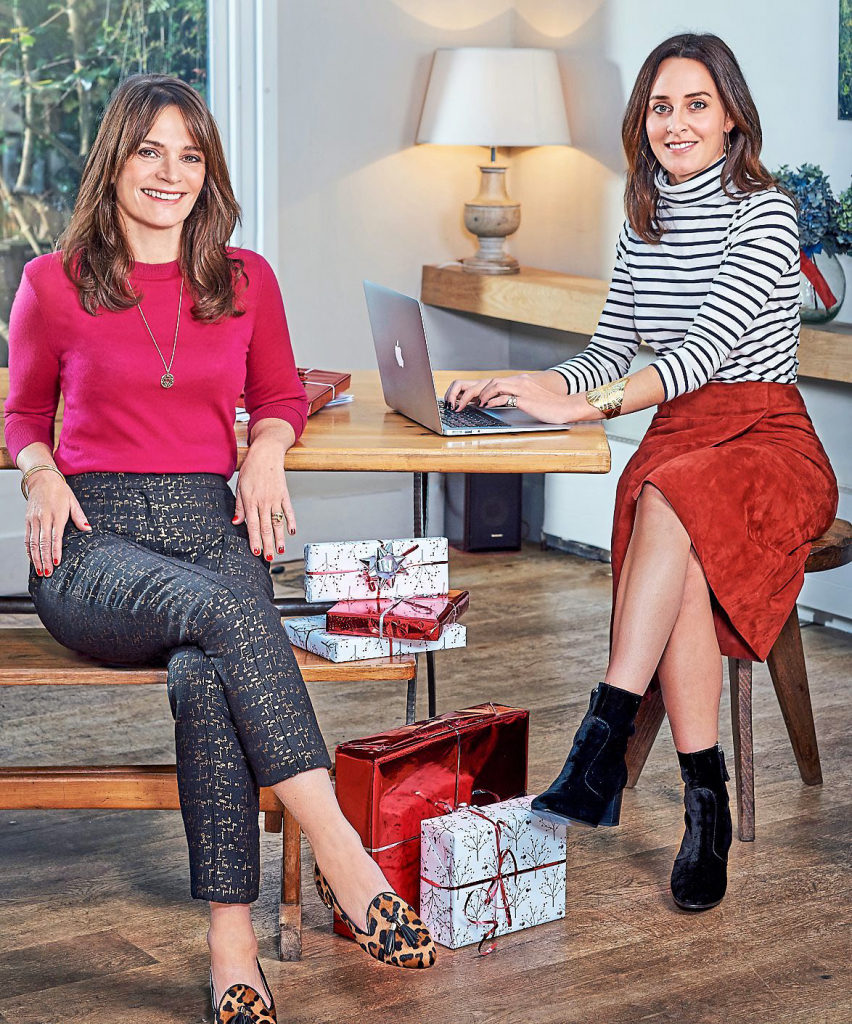 THE very best part of the four hours I spent this week with glossy, shiny, silky, super-posh elite PA Polly Hadden- Paton was the moment I handed over a pair of ruined red velvet Alexander McQueen sample shoes.

They’d been lying in shame in a plastic bag under my desk for more than a year — ever since they’d been chewed by a dog at my husband’s over the top Seventies Brazilian- themed birthday party. They aren’t even  mine. They belong to my favourite neighbour who’d taken them off to perfect some particularly ambitious dance moves. But it was our party and our friend’s dog (who brings a Jack Russell to a fancy dress party?), so I felt responsible and promised to get them fixed. And then didn’t.

That was 15 months ago. Another birthday has passed. Still the shoes languish. Every so often, I catch sight of them and feel sad and bad. And when I see my neighbour, they hang between us; a small invisible cloud of awkwardness. But then I handed them over to Polly the PA — and all that disappeared. ‘Stop! Oh my gosh!’ she gasps as she marvels at the savage teeth marks. And then regains her composure. ‘Sure, sure, sure. Not a problem! Not a problem!’ she chirps, and urgently taps at her shiny laptop.

‘I’ve got this brilliant woman who does bags and shoes. She’ll be here at 11am. Don’t worry, she can sort anything.’ So can Polly. Quite literally, anything. She can get your son into Eton, charter a private jet, coordinate your house move and switch over your bills, stand in line for your new iPhone, do your Christmas shopping, snag tickets for sold-out shows, order your takeaway lunch, remove chewing gum from the crotch of your designer jumpsuit, helicopter you off a mountain, book Botox appointments, get the chocolate off your sofa and rid your house of unwelcome ghosts (yes, really). She’s not, you see, any old PA, though
she does love to type an old-fashioned letter (‘If only I had time’).

No, she’s one of a new brand of super-  PAs who can solve any problem with a couple of taps of their beautifully manicured fingers.

Her clients include Premier League footballers, rugby players, hedge fund managers, actors, pop stars,sheiks . . . and, now, busy working mums like me — and you.

Because Polly now runs her own business, youneedapa.com, with fellow PA Vicky Silverthorn. They met when they were both working for Lily Allen, (as you do), and charge £40 an hour to harassed mothers like me who wouldn’t dream of having, let alone be able to afford, our own PA, but have dispiriting ‘to do’ lists that never seem to get any shorter.

It was when they parted company with Lily (‘We’ve not seen her for ages,’ Polly says discretely) that they realised there was a whole world of potential clients out there desperate to access their unrivalled contacts and ruthlessly organised brains. A few days before we meet, we spoke on the phone and she asked me to send her a list (‘Not a “to do” list — an action list,’ she says. ‘It’s more “C’mon, yeah!” ’), told me nothing was too small, silly or shameful and that ‘everyone has different needs’.

At the end, she promised that, together, we would ‘conquer it all’ and I would feel ‘physically lighter, more mindful and relaxed’. Wow! So I got started. Onto my list went our lapsed house insurance, a shepherd’s outfit for my son’s Nativity show (a week late for rehearsals), the mountain of mending and drycleaning that’s been stuffed in the bottom of my wardrobe for months, three broken handbags, advice on the best place for laser hair removal and scraggy neck smoothing (without surgical intervention), turning up a pair of ‘new’ jeans bought in June and our monumental moth problem.

I emailed all that, and back she pinged: ‘Super! Let me know if you think of anything else xxxxx.’

So I did. ‘Help choose new glasses. Sort out cat insurance. Worm tablets. Flea collar. Source a sold-out Hatchimal [this year’s cult kids’ Christmas present], book holiday flights to Menorca. It was as if a blockage had been removed. I couldn’t stop.

Each time her response was so upbeat — ‘Not a problem! Of course!’ — that I became ever more ambitious.

‘Table for four at the Chiltern Firehouse. Tickets to see Strictly Come Dancing. A Glastonbury ticket for someone who’d missed the deadline to register.’ ‘No problem!’ she chirped back, and enquired about parking. Naturally, I’d run out of council parking permits — so onto the list they went. When we finally meet and she hops onto a broken stool at my scuffed kitchen counter I feel both daunted by her posh swishy glossiness and embarrassed I’d displayed my horribly disorganised underbelly to a stranger.

But she and Vicky have seen it all. Houses overflowing with rubbish, post unopened for three years, unpaid bills, stains of all sorts on clothes, carpets, sofas, curtains. Men who can’t order their own takeaway lunches. People incapable of Christmas shopping.

They’ve booked bikini waxes, back, sack and crack waxes and endless appointments at STD clinics — usually under their own names to protect bashful clients. On paper, Polly must be the most thoroughly tested lady in London. ‘I’m just happy that everyone’s being safe,’ she says. ‘Everyone has their own needs.’ For me, she limbers up on a few unpaid bills, the house insurance, a moth prevention kit and some vitamins recommended for me by a doctor to make me sleep better, be less tired and more efficient.

They’ve been on my ‘to do’ list for months. Along with new glasses — one of my two pairs has only one arm and the other is so scratched I can barely see. I’ve been wearing my contact lenses for so long each day that I’m damaging my eyes. But Polly’s here, so tick, tick, tick — off the list they go. Along with the shepherd’s costume, the Hatchimal and pretty much everything else.

Next she sets me up on a website that takes a video of my face and then pops hundreds of virtual pairs of specs on my slowly rotating face, to help me choose. She prowls among my towering piles of papers like a lion on Planet Earth II — pouncing when she finds an unpaid paper bill. ‘What’s this? How do you usually pay? Do you have a direct debit? Shall I set one up right away?’

She ’s a machine. But so she should be. Most of this stuff she could do standing on her glossy head with her beautifully manicured hands tied. Because she and Vicky are members of the PA SAS — an exclusive, self-selecting club of about 100 elite PAs.

The top secret club’s been likened to Jeeves and Wooster’s ‘club for gentlemen’s personal gentlemen’ and The Society of the Golden Keys — the real life network of top hotel concierges. In comes a problem; one email pinged out to club members usually solves it. A taxi for a client filming in Outer Mongolia? Done. The latest sold-out handbag? Not a problem. They help each other out, swap contacts, swoop to the rescue with a private jet or tickets to Adele or the mobile number for the best stain remover in London (Kareem, the sweet-smelling saviour from Kynance Dry Cleaners in Kensington, if you’re interested).

Naturally, Polly can’t give the name of the club because ‘everyone would want to join’, and becomes pink and flustery when I pry. But she will confirm that members are both male and female and have to be both nominated and seconded.

It’s astonishing how log-jammed our lives have become. How, week after week, month after month, some of us — I know I’m not alone — write the same lists, then berate ourselves for failing to action them We’re busy, we’re juggling, we feel like we’re going round in circles, and an un-actioned action list just adds to the stress. Which is presumably why, along with our cleaning, ironing, gardening and DIY, more and more normal people like me are outsourcing their admin to people such as Polly.

‘It’s all about valuing your time,’ she says. ‘Sometimes there are better uses for it than sitting on the phone to British Gas for an hour.’ Polly and Vicky spotted the gap and practise what they preach. Vicky is head of de-cluttering and so fastidious she used to hide mismatched plates at her childhood home when friends came to stay.

Polly ‘adores’ admin — her handbag contains a label-maker, holepuncher, sticky tape, scissors, various chargers and, occasionally, a shredder and portable printer. At home, her own wardrobe is a colour-coded, season-sectioned pleasure. She lights up when talk turns to throwing things away — ‘It gives me a sense of relief. It makes me happy.’

So does being busy. She’s on call 24/7 and never ever turns her phone off. When she pops to the loo in the night, she books flights, cancels unused gym memberships and tees up dog walkers.

It goes without saying she has endless Christmas shopping spreadsheets, finished hers in November and has wrapped everything. Though she sheepishly admits she’s yet to decorate the parcels with stencils and bows. Oh, the shame, Polly! There are some things they’ll baulk at — ‘anything rude or that might harm someone’ — and, rather surprisingly, thank-you letters. ‘I’d be happy to type a template, but I really think they should do it themselves,’ she explains.

It’s lovely having Polly tap-taptapping through your backlog. Even nicer when every few minutes one or other of her SWAT team turns up to whisk away my broken or stained detritus — Vanessa Jacobs, the bag and shoe lady with her very white teeth and can-do attitude, and the fragrant man from Kynance, who says darkly: ‘You should see some of the things we get. We could write a book,’ and then whisks my mending and stains away with no mention of return date or cost.

Ah, yes , costs. Which are ratcheting up at an alarming rate. Because within five minutes of arriving, Polly had her pretty hands on both bank cards and all my passwords and has been hard at it with them ever since, though she does assure me they’re ‘super-conscious of cost’ and ‘always try to find a cheaper alternative to the £500 handbag’. But then, some things are priceless, such as the moment she’s on her phone sorting out my expired cat insurance and says, in her wonderfully crisp, posh voice: ‘Hello, I’m calling on behalf of my boss . . .’ I am a boss! Just the sound of it made me feel efficient. Organised. In charge, for once.

And, two minutes later, our fat black cat was insured for the first time in four years. Having a PA for day sounded a ridiculous luxury at the beginning of the week. Not now. In fact, I’m going to treat myself to a quick blast of Polly for Christmas, for my birthday and maybe Easter, too. And I recommend that every stressed-out woman bowed andbroken by their ‘to do’, sorry,  ‘action’ list, does the same. Because Polly is the gift that keeps on giving.

In the days after her visit, I receive endless emails reminding me of how great she is. There are confirmations of various insurance policies, flights, tickets and my table for four at Chiltern Firehouse; Hatchimals and shepherd’s outfits arriving by Amazon Prime and long-overdue vitamins and moth deterrents in the post. Her efficiency is contagious. I find myself buying glasses, getting my shoes resoled, returning unwanted items and (almost, but not quite) looking at my bank statement to  see how much she’s spent.

For now, though, I’m just waiting for those Alexander McQueen shoes to come back, so I can make it up with my neighbour.

Would you hire a PA to the stars to ease your festive stress? December 12th, 2016Polly Hadden-Paton